one sheet
synopsis
Back to All Films

DRIVEN TO LIVE….LIVING TO DRIVE. Based upon a true story, Kimberly Myers is a record-breaking race car driver with a secret. At the age of eighteen she was diagnosed with the fatal lung disease, Cystic Fibrosis (CF). 65 Roses follows her struggle to to cope with her disease while breaking into the male dominated sport of racing. 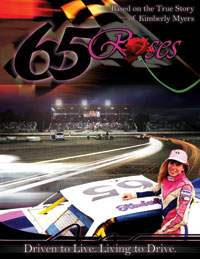 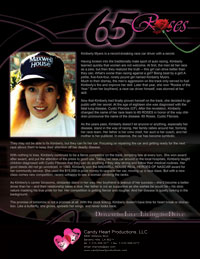 Kimberly Myers is a record-breaking race car driver with a secret.

Having broken into the traditionally male sport of auto racing, Kimberly learned quickly that women are not welcome. At first, the men let her race as a joke, but then they realized the truth -- this girl can drive better than they can. What’s worse than racing against a girl? Being beat by a girl! A petite, five-foot-four, ninety pound girl named Kimberly Myers.

Much to their dismay, the men’s aggression on the track only served to fuel Kimberly’s fire and improve her skill. Later that year, she won “Rookie of the Year.” Even her boyfriend, a race car driver himself, was stunned at her skill.

Now that Kimberly had finally proven herself on the track, she decided to go public with her secret. At the age of eighteen she was diagnosed with the fatal lung disease, Cystic Fibrosis (CF). After the revelation, Kimberly changed the name of her race team to 65 ROSES in honor of the way children pronounce the name of the disease. 65 Roses. Cystic Fibrosis.

As the years pass, Kimberly doesn’t let anyone or anything, especially her disease, stand in the way of racing. Her family rallies around her, forming her race team. Her father is her crew chief, her aunt is her coach, and her mother is her publicist. In essence, the car has become symbolic.

They may not be able to fix Kimberly, but they can fix her car. Focusing on repairing the car and getting ready for the next race allows them to keep their attention off her deadly disease.

With nothing to lose, Kimberly continues to be a fierce competitor on the track, tempting fate at every turn. She won award after award, and put the attention of the press to good use. Taking her race car around to the local hospitals, Kimberly taught children diagnosed with Cystic Fibrosis that they can do anything if they stay strong and follow their medical routines. Her good deeds did not go unnoticed. In 1993, Kimberly won the MAXWELL HOUSE REAL HEROES OF NASCAR award for her community service. She used the $15,000 in prize money to upgrade her car, moving up a race class. But with a new class comes new competition, racers unhappy to see a woman climbing the ranks.

As Kimberly’s career blossoms, obstacles stand in her way. Her boyfriend is jealous of her success – she’d become a better driver than he – and their relationship takes a dive. Her father is not as supportive as she wishes he would be – his stoic nature masking his true pride for her. Her competition is getting fiercer and rougher. And her disease is quietly lurking in the background.

The promise of tomorrow is not a promise at all. With the clock ticking, Kimberly doesn’t have time for heart break or distraction. Like a butterfly, she grows, spreads her wings, and never looks back.
top of the page...